One of the first things I noticed about the larger sized iPhone 6 and 6 Plus straight after launch was that for once, they seem to be following in rival Samsung's footsteps - rather than the other way round.

Samsung have maximised on this with several 30 second ad slots, taking the piss out of hardcore Apple fanatics awaiting the large screen announcement, and other features (faster charging, multi window and wearables) which are already part of Samsung's offering.

And they do have a point. Apple aren't exactly innovating here - a number of the features (most notably the larger screen) have been done before. And some time before at that.

However, is it necessarily a bad move for Apple that they aren't the first in both the fields of larger smartphones ("phablets") and smart watches?

When it comes to technology, Apple is a market leader. They create, and people will buy - I almost feel there's a sense of if Apple's doing it, big phones must be cool now. Whether this reputation will last is a different question (you only have to think back to Nokia's early 2000s market saturation to appreciate how quickly this could change) but from my point of view, not being first out with a new feature/spec isn't that much of a crime.

This is especially with new streams of technology such as wearables. Take Google Glass for example. It's certainly the first mover in this field, but at the moment no ordinary person would be seen dead in it. It will take 2 or 3 iterations of this kind technology before it catches on to the mainstream public.

At the end of the day, Apple's priority isn't being first but being the most desirable. Their sleek and streamlined brand and product experience is more important than getting new technologies on the shelves fastest. And that is certainly no bad thing.

And Samsung does have a point. The Korean tech giant has more than two years’ first-mover bragging rights over Apple on both of the latter’s launches announced last week. Samsung’s ‘phablet’ the Note has been on the market for almost three years and its watch predates Apple’s effort by exactly a year. The headstart Samsung’s innovations have is only exacerbated by the fact that Apple has repeatedly accused Samsung of copying its innovations in the past. 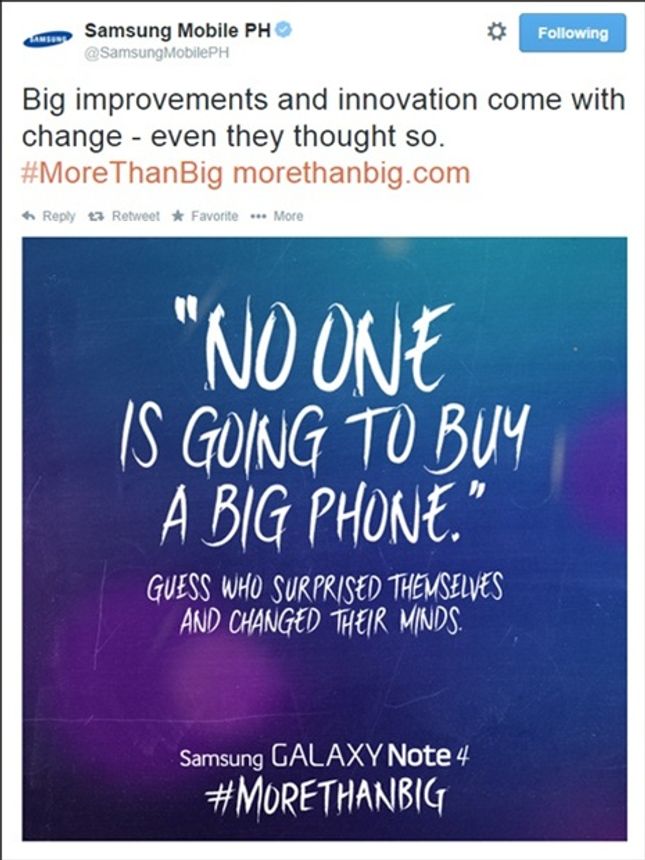 “No one is going to buy a big phone” @SamsungUK made us laugh! Watch their video #MoreThanBig http://t.co/xI9f71glWa pic.twitter.com/muQwzPt6IQ

Apple and Samsung gonna fight til the death😂💀💀💀

Information Overload - Is the Internet Really to Blame?
Anonymous

Should you trust a robot over a human?
Anonymous

A Podcast - It's actually very simple and easy to do ... and it's extremely Authentic.
Connor Kinnear

Why are professional services websites so hard to get right?
Samuel Page
repost  cancel